In 2016, Prologue to the Performing Arts launched the Arts Champion Awards to recognize educators, community leaders and presenters who work tirelessly to ensure that young people have access to performing arts experiences. The award is made annually to up to three individuals who exemplify the vision that Prologue has supported for over half a century!

Prologue is pleased to name Genny Weerdenburg and Tracy Reid as our 2017 Arts Champion Award recipients. 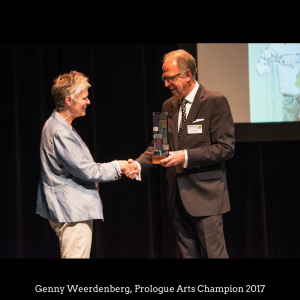 Principal of Simcoe Street Public School in the District School Board of Niagara, Ms. Weerdenburg has continually promoted Prologue performances through the years. Her award was presented at Simcoe Street Public School on December 6, 2017 at 1:45 pm by Prologue to the Performing Arts’ Chair, Melvin Hurst. We thank Ms. Weerdenburg for her continued support of bringing the arts into schools as she retires this season. 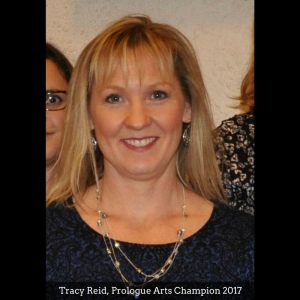 Tracy Reid is an FSL Special Assignment Educator for the Algoma District School Board. Ms. Reid has supported French language Prologue performance tours in schools in the Sault Ste Marie area for many years. Her award was presented in association with Over the Rainbow Children’s Entertainment Series at the Sault Community Theatre Centre on Saturday February 3, 2018 at 2:00 pm. Ms. Reid’s achievement was featured in the Sault Online and the Sault Star.