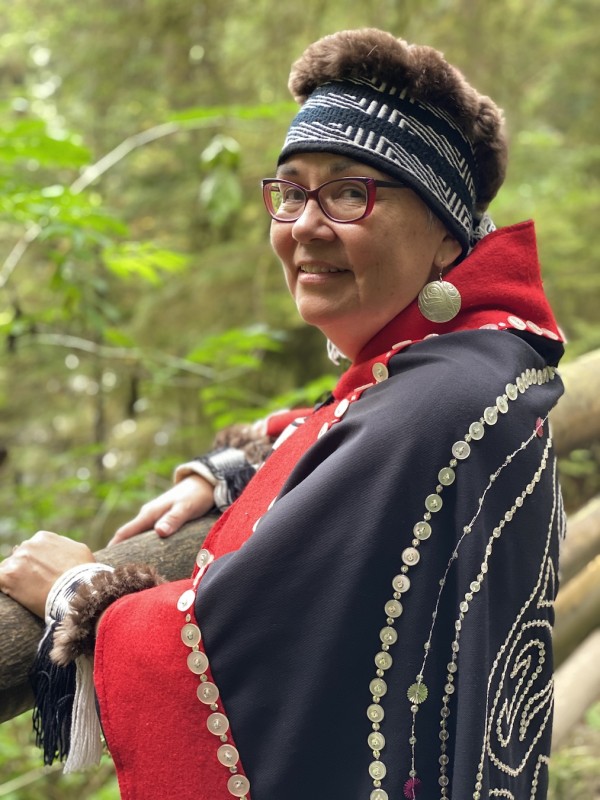 In her live storytelling performance, Kung Jaadee shares telling of a few famous Haida legends about Raven (Yaahl), the creator of the world, and their universal teachings. Enjoy the stories of “Raven Brings the Water,” Raven’s Brings the Light” and “Raven’s Feast.” She also shares some traditional Raven songs while using her drum, teaches some basic words in X̱aad Kil (Haida language), and shows her traditional regalia. A post-show Q & A includes a discussion about Haida culture, traditions, and history.

Kung Jaadee (Roberta Kennedy) is a professional storyteller, educator and published author belonging to the X̱aayda (Haida), xʷməθkʷəy̓əm (Musqueam) and Sḵwx̱wú7mesh (Squamish) First Nations. Her Haida name, Kung Jaadee, means ‘Moon Woman’ and was presented to her at her great uncle’s memorial feast by her cousin Crystal Robinson. Over the past 28 years, Kung Jaadee has performed traditional Haida legends, while also sharing vivid personal stories about her clan’s survival of the smallpox epidemic, and the history and culture of her people. She has performed at hundreds of festivals, schools and Aboriginal celebrations across Canada. She is the author of the popular children’s books, Raven’s Feast and Gifts from Raven (selected as a Local BC Book to Read), as well as curriculum textbooks, Haida Nation: Indigenous Communities in Canada and We Are Home. Her stories have also been published in several anthologies, magazines and online publications. Most recently, Kung Jaadee worked as the Vancouver Public Library’s Indigenous Storyteller in Residence.

While living in Haida Gwaii, she taught X̱aad Kil, the Haida language while working with the Old Masset Village Council, at Chief Matthews School and the Haida Health Centre in Gaw Tlagee. Kung Jaadee holds a Bachelor of Arts with a major in English and minor in Women’s Studies from the University of Victoria and a Bachelor of Education from the University of Alberta.