On Tuesday, January 24th, Prologue to the Performing Arts company DuffleBag Theatre had the immense pleasure of performing Peter Pan at Johnny Therriault School in Aroland First Nation. The school is located in the Thunder Bay district, and as a small community, these students and families are not often privy to performing arts experiences. As DuffleBag is currently on a tour of Northern Ontario venues, Frank Dzijacky of Geraldton Children’s Entertainment Series let us know about this rare opportunity to perform in this community, and Prologue and DuffleBag jumped at the chance! With the generous sponsorship of The Rotary Club of Kitchener (via Cheryl Ewing), Robert Baird, Geraldton Children’s Entertainment Series, and Prologue, DuffleBag set out to visit the Aroland school on a beautifully sunny, snowy afternoon. 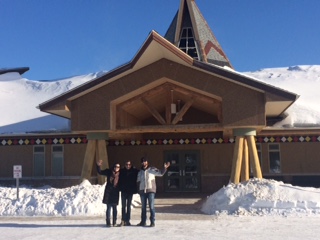 We spoke to one of DuffleBag’s performers, Christopher Darroch, to hear about this exciting day: “We were so pleased and honoured to be the first performing arts group to perform at Aroland First Nation School. Knowing that this was something unprecedented for these great kids, we were hugely impressed by the excitement of the audience for the show, and even more for the courage and willingness of both students and staff to participate as actors in our production of Peter Pan. It was a show none of us will ever forget.” 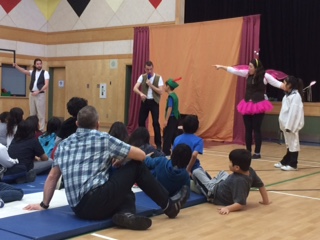 The principal of Johnny Therriault School, Bill Beaucage, invited parents and community members to experience the show along with the students. He further explained the value of bringing DuffleBag’s performance to their community: “Being able to provide our students with a variety of theatre experiences and opportunities is a priority for the staff at Johnny Therriault School.  Being a First Nation school in remote Northern Ontario, our students have had minimal exposure to live theatre….Thank you for making this experience happen in Aroland First Nation.  Your thoughtfulness and kindness has not gone unnoticed.”

Marcus Lundgren, Artistic Director of DuffleBag let us know that the troupe travels to Northern Ontario every few years and enjoys every second of the journey. He said, “DuffleBag Theatre loves performing for Northern Ontario audiences!  They’re always so much fun and appreciative.  We get a really good sense of their wonderful communities as we stay and travel through the region as well.”

Students from Johnny Therriault School wrote to us to let us know what they enjoyed most about the performance – see the quotes below! Thank you to everyone involved, especially our sponsors, for providing these students with their first Prologue and DuffleBag performance!

About the Author: Tamara Weisz